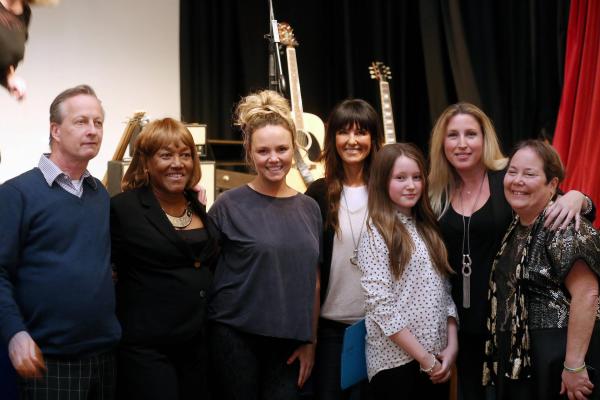 The Marc Bolan Coffee House event for The Marc Bolan School and The Red Cross took place on February 8th 2015 at the Vera Fletcher Hall in Thames Ditton and was a resounding success.

Jed Dmochowski began the evening with a short set of both original solo material and from his punk-mod-pop combo The VIP’s. The set began appropriately with ‘Africa’. Jed was supported on stage by Ben Hooper on bass.

Next up came Gabriella Farley from the Red Cross who gave a short presentation about the organisations work in Sierra Leone and the way in which donations are used to the help and support those suffering and recovering from the Ebola crisis.

Then a talk and slide show from Bolans Architect who talked us through their plans for the building of the school and presented a wonderful model of the building, along with small figures, some of which had been stuck on by Gloria the day before!

Claire and Hannah from the Cardiff to London walk (on behalf of the school) both talked about how they were introduced to the world of Marc Bolan and how their idea for the walk came about. For Hannah’s report on the evening and more information about the walk, please visit: http://bolan-walk.weebly.com/blog

Next introduced to the stage was Fee Warner of TAG who spoke about the fate of the tree and plans for the site and about the Marc Bolan Rose, TAG had kindly split 50/50 all profits raised from the sale of the initial sale of the rose. For details on the rose please visit Mercury Moon.

More music came next, this time from the legendary Tyrannosaurus Jed, although for this performance he branched-out and performed a number of T.Rex numbers which got the crowd boogieing.

Next to the stage was the lady who conceived and organised the event, Deborah Reisman, Deborah was joined by Artist Jennifer Crawford who had donated some paintings to the raffle and an auction, she also presented two painting to Gloria, one of Gloria (below) and another of Marc.

We were next entertained by singer and guitarist Gary Rollagher who performed a selection of well-known pop and rock classics and got some of the crowd dancing.

We were then joined by local actress Charlie Brooks (East Enders, The Bill, Wired, Bleak House) who joined in the fun and was photographed with almost everyone – here Gloria and Bola Falase, Director of Bolans Architects get their turn.

Gloria then gave a passionate speech about how much the school already means to the students who have been attending and how much the finished school will help the children be able to express themselves – to help them make a better future for themselves and future generations.

We use cookies on our website to give you the most relevant experience by remembering your preferences and repeat visits. By clicking “Accept”, you consent to the use of ALL the cookies.
Do not sell my personal information.
Cookie SettingsAccept
Manage consent

This website uses cookies to improve your experience while you navigate through the website. Out of these, the cookies that are categorized as necessary are stored on your browser as they are essential for the working of basic functionalities of the website. We also use third-party cookies that help us analyze and understand how you use this website. These cookies will be stored in your browser only with your consent. You also have the option to opt-out of these cookies. But opting out of some of these cookies may affect your browsing experience.
Necessary Always Enabled
Necessary cookies are absolutely essential for the website to function properly. These cookies ensure basic functionalities and security features of the website, anonymously.
Functional
Functional cookies help to perform certain functionalities like sharing the content of the website on social media platforms, collect feedbacks, and other third-party features.
Performance
Performance cookies are used to understand and analyze the key performance indexes of the website which helps in delivering a better user experience for the visitors.
Analytics
Analytical cookies are used to understand how visitors interact with the website. These cookies help provide information on metrics the number of visitors, bounce rate, traffic source, etc.
Advertisement
Advertisement cookies are used to provide visitors with relevant ads and marketing campaigns. These cookies track visitors across websites and collect information to provide customized ads.
Others
Other uncategorized cookies are those that are being analyzed and have not been classified into a category as yet.
Save & Accept
Loading Comments...